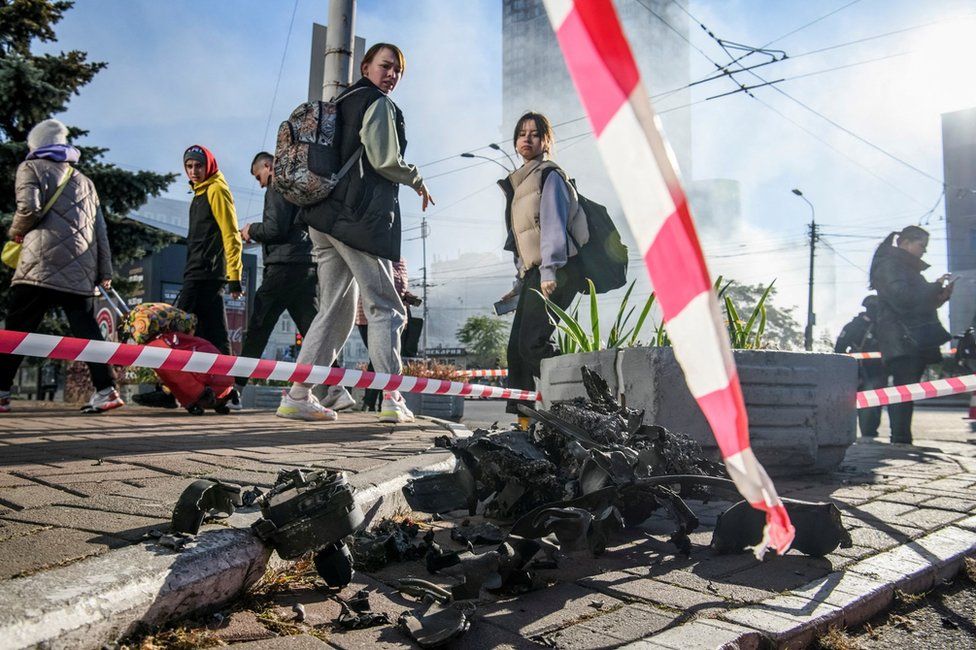 Israel has repeated its long-standing refusal to sell air defence weapons to Ukraine despite a fresh appeal from Kyiv after this week's "kamikaze" drone strikes.

The weapons unleashed by Russia were reportedly Shahed-136 drones supplied by Iran - causing Kyiv to make a fresh demand for help saying Tehran's "complicity" should be a "red line" for Israel.

Israel and Iran are avowed enemies, but the Israelis have so far refrained from providing Ukraine with weapons in a bid to maintain relations with Moscow.

On Wednesday, Israel's Defence Minister Benny Gantz said their position had not changed.

"Our policy toward Ukraine is clear - we are on the side of the West, we provided humanitarian aid, took care of refugees and the wounded," he told Israel's Kan radio.

"For obvious reasons, we did not want to involve ourselves in combat systems. This was the policy until now. I am careful about this matter."

At least eight people were killed in Monday's explosive drone attacks in Ukraine.

After the attacks Ukraine's Foreign Minister Dmytro Kuleba said the country would request air defence systems from Israel "without delay".

"Now that Iran has effectively become an accomplice in the crime of aggression against Ukraine, I think that if there is anyone in Israel who is still unsure about whether or not to help Ukraine, this hesitation should now dissipate," he said.

"The same drones that are destroying Ukraine today are also aimed at Israel," he added.

'Freedom of action' in Syria

The issue of air defences rose to the top of the agenda at meetings in Brussels last week of Nato defence ministers, who said countering Russian strikes would require a patchwork of systems.

Nato countries have been supplying Ukraine with defensive weapons since the start of the war, while the US and Europe recently pledged to send more advanced systems.

During a speech to the Israeli parliament in March, Ukrainian President Volodymyr Zelensky pressured lawmakers to help, saying: "Everybody knows that your missile defence systems are the best."

Israel's best known air defences are its Iron Dome batteries, jointly developed with the US, which are primarily used to shoot down short-range rockets fired by Palestinian militants. During recent conflicts with militants in Gaza the system has intercepted around 90% of projectiles that crossed into Israeli territory and were headed for populated areas, according to the military.

But analysts say it would have limited effectiveness in Ukraine, whose land mass is around 30 times that of Israel, and which Russia targets with much longer-range weapons, including cruise missiles.

Israel's reluctance to be drawn into weapons sales to Ukraine - even amid Iran's reported arming of Russia - stems from the impact it believes the decision could have in the Middle East.

Israel effectively treats Russia like a neighbouring power with whom it "walks on eggshells", according to the Israeli military analyst Alex Fishman.

Russia has controlled much of the airspace over Israel's northern neighbour Syria since it entered the civil war in 2015 to prop up President Bashar al-Assad's regime. Israel frequently launches air strikes into Syria targeting Iranian proxy fighters and Iranian weapons transfers to the Lebanese militant group Hezbollah.

"The Russians are sitting on our borders, in the Golan mountains, in Syria and along the Mediterranean shores, the navies are close all the time. Israel [can't] be in an open conflict with the Russians," Mr Fishman told the BBC.

Israel's military informs Russia ahead of impending air strikes in Syria, involving a hotline officially known as "the Russian-Israeli joint work group on prevention of dangerous incidents in Syria".

Preserving this - what is known in Israel as military "freedom of action" in Syria - has been a priority for Israel's security establishment. Its concern, among others, is that aggravating Moscow would lead to further Iranian entrenchment in Syria, and advanced weapons getting to Hezbollah.

When an Israeli government minister at the weekend called for Israel to help arm Ukraine, the leadership got a flavour of how Moscow might respond.

"It will destroy the relations between [Russia and Israel]," said Dmitry Medvedev, a former Russian president and a close ally of President Vladimir Putin.

Israeli officials did not comment on a media report on Wednesday that claimed Israel had not carried out strikes in Syria for over a month. The report led some to question whether its co-ordination with Moscow had deteriorated.

Israel was also pressured again by President Zelensky, who last month spoke of his "shock" that "Israel did not provide us with anything. Nothing. Zero."

Mr Fishman, the military analyst, said Israel's historical ties with both Russia and Ukraine were as much of a consideration as the diplomatic and military constraints.

"The first priority for Israeli foreign policy is the Jewish community," he said.

Israel has seen an influx of more than a million Jews from the former Soviet Union since its collapse in 1989.

The invasion of Ukraine triggered a mass migration of at least one in eight of Russia's remaining Jewish population - by August 20,500 of Russia's estimated total of 165,000 Jews had emigrated to Israel.

Ukraine also has one of the biggest Jewish communities in Europe. An estimated 15,000 Ukrainian refugees are living in Israel, about a third of whom have qualified for Israeli citizenship under the Law of Return through having at least one Jewish grandparent.

But the Jewish Agency, which facilitates migration of Jews around the world to Israel, has been under pressure in Moscow.

"If we sell the Ukrainians such a [weapons] system, the first step is the Russians will get rid of the Jewish agency," said Mr Fishman.

Source: https://www.bbc.co.uk/news/world-middle-east-63318659
We use cookies to ensure that we give you the best experience on our website. If you continue to use this site we will assume that you are happy with it. Ok